Picking up the Suite from ProLite was an opportunity for a road-trip in the Santa Fe Sport and a shakedown tow, all in one.
Cost estimate was less than shipping would have been. We’ll see how that turns out once the adding machine quits whirring. 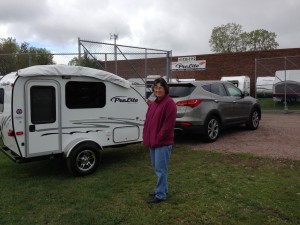 We received a very good briefing on the Suite and the only hitches were that our BC Trailer License Plate is smaller than Quebec ones so tie wraps were used as a temporary.
The only other hitch was that I was given and incorrect hitch ball height. I think the measurement given was for 14in wheels instead of the 13’s of the Suite. A redo of the ball to the smaller drop served as a good temporary. Made the front of the trailer lower than level but was no problem at all towing it home. Once home I got a receiver with a 1/2 inch rise and all is well.

Weather in Ontario did not co-operate to do a sleep-test. Not until we got to Alberta was it warm enough to try it out. It’ll take some adapting, coming from a 26 foot GMC Motorhome but it’s all good.

The tow was effortless. Speeds were as regular posted. I did not install the brake controller for the trip home. Was a bit extra careful coming down the grades on the Coquihalla. By now the Brake controller has been installed to add that extra bit of safety for next trip.

The Suite stayed hitched on all the time, except while visiting Mr. Lube in Ottawa. This was in part due to not having any ball lock and I didn’t want to make it extra easy,  just in case someone took a shine to it without wanting to pay the price of admission.
The other reason is that most municipalities don’t allow an un-hitched trailer to be parked on their streets.
It was absolutely no problem to drag the Suite into parking lots or shopping centers. Had to be a bit more selective with the actual parking but any space that had 2 slots open head to head made for a perfect spot.

Almost every time we stopped in a public lot the Suite had heads turning and folks saying Hi and asking to get a peek. The most common comment: Oh it’s so cute.