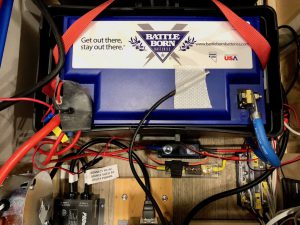 It all started by trying to get my Aliner Ascape to ride as smooth as possible. After some research and forum postings/replies I adjusted tire pressure to actual weight instead of just going by what it says on the tire sidewall, which is what I was told to do. That advice turned out to be Hogwash. I also had the wheels balanced. Major difference to the ride.

During all that I decided to check/confirm hitch weight, which is recommended to be 10-15% of trailer weight. I found that my hitch weight was higher than 15% so I started moving stuff around. I found that 2 x 20 lb propane tanks and the battery were the worst offenders as they sat directly on the A-frame of the trailer. After much trial and error shuffling with propane tanks I decided on 2 x 5 lb tanks. That allowed me to keep existing setup with just minor mods to height of regulator/selector.

It had to be moved inside the living area, close to the axle. AGM sealed type came to mind first off as that’s what I had done in previous trailer. However, found that it was not for use in living area unless vented to outside. That was not an option as extra room would be required and chopping big holes in the trailer was a no-no.

Eventually my searches came across Lithium Batteries replacing conventional car and RV batteries. Internet searches had me bounce around a few different continents. While direct from China was the cheapest in dollars I felt it was too much risk for a big chunk of green. Eventually I came across Solacity’s website.

Not only is Solacity in Canada, making my purchase much easier, they had a suitable battery listed, the Battle Born BB10012.

After digging into Battle Born Batteries website I decided to order.

Kudos to Solacity and Battle Born for efficient shipping and putting up with my questions. Thank You.

The Ascape has unused space under the bed on left side. This space contains the Power panel and converter and the rest is designated as available storage. Not too convenient to get to anything stored there so it was a natural to be used for battery, inverter, etc.

Installing the Battery was straight forward. The hardest part was placing the battery box in such a way so as to leave space for inverter, fuses, relays, etc. I also wanted to leave room for an additional battery, just in case.

I used standard battery boxes, without lids, screwed to the floor. 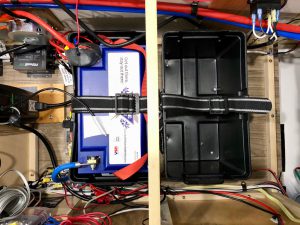 The project expanded somewhat as I went. I had to change solar charger controller and decided to add a Victron BMV-712 Battery Monitor as battery fuel gauge.

I used a Renogy Adventurer-LI as solar controller. Both the Renogy and the Victron are Bluetooth enabled for easier monitoring/configuration.

Separate fuse links were added for Inverter, Built-in Converter and Solar Charger. Some items are fused with standard in-line fuses. I used the battery positive as main terminal so as to avoid an extra connection. What I mean by that is that every fuse link goes to the positive terminal. No downstream sharing.

The same wires that came from battery up front are used to get power up to the front, just in case needed at some point. The wiring for the original solar controller is used to provide switched power to the TPMS repeater mounted under the A-frame.

While everything was open I did a few other tweaks, but that’s for another post.

Inverter power is available throughout the trailer. Converter and Charger only power up when on real shore power.

I kept the original WFCO Converter in play, supplemented by original Solar panel when out camping. I also added a 7.2 Amp Smart Battery Charger/Maintainer as a top-up when on shore power. While under tow the battery will get some charge from my Volvo.

This was a fun project. Learned a bunch about batteries. Hopefully not just enough to be dangerous. Was pleasantly surprised to save some battery weight. Hopeful that the Lithium battery will give me 4-5 years of service, in which case it will have been a good investment. Time will tell. I now have to figure out how best to take care of the Battery, or Batteries, to get those 4-5 years as actual camping use is infrequent, sad to say.