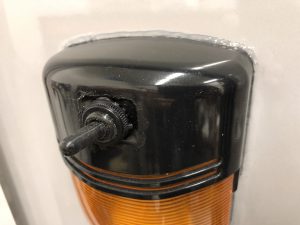 A minor irk that one had to open the door to turn the outside light on. Meant that you couldn’t ‘see’ who/what was out there before opening the door. Minor irk but an irk nevertheless.

A tweak to a 3-way switch scheme is the solution. Hardware change to 2 x SPDT switches would do it. At least one switch has to be weatherproof to replace the switch on the light itself.

I didn’t have any luck to find a direct replacement rocker type but found some 2 position toggle switches that should work. Time to get it done…

I used a toggle switch on the light, replacing the sub-miniature, which was a bit cumbersome to operate anyways, due to the size and rubber seal. 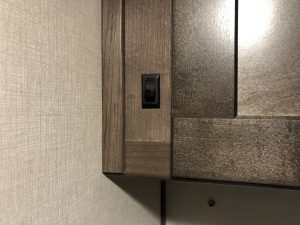 The inside switch is a rocker type. Toggle type just wouldn’t have looked right.

Possible the hardest task of the whole thing was carving that hole for the rocker switch. 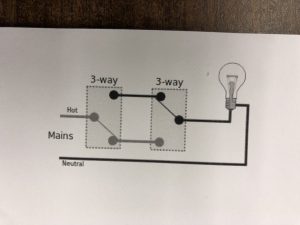 The only hardware required: 2 SPDT switches of the 3-pin ON/ON variety.

I sourced the switches from Amazon.ca.

Connection is simple as per this diagram. 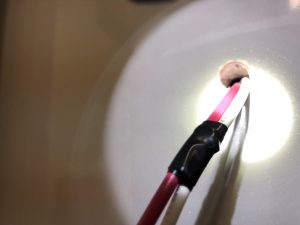 The light is easily removed exposing the wiring on the inside. No new holes required as existing is big enough to feed the extra wires. 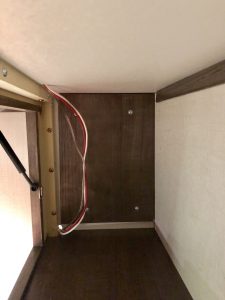 Inside access is gained by removing the rear cupboard panel, 2 screws.

There is ample room for the inside switch but a bit of a bear to cut the hole. An alternative is to use a switch that mounts trough a round hole. For me that was not an option. Too fussy I guess. 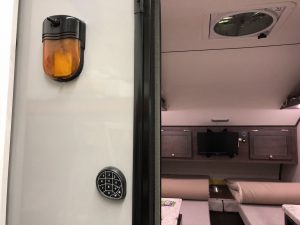 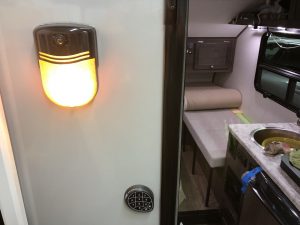 In case you’re wondering what the black keypad is/does… door lock from http://www.rvlock.com

Mounting the round toggle switch into the rectangular hole required a bit of MacGyver’ing. I used silicone to ‘glue’ it into place in addition to fabricating a rectangular washer and then coating the exterior with liquid electrical tape. Probably a bit of overdo but it should at least keep the water out.