Still some tweaking now and then but basically my Power Station is done.

I knew that I wanted less dependency on Hydro, yet not loose the conveniences of power. 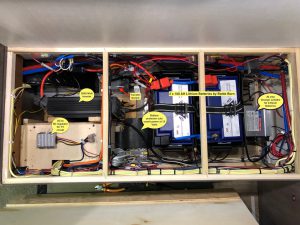 When I started I wasn’t sure what I’d be doing yet, it was kinda ‘design on the go’. I knew that I wanted more power from the sun as I had also added solar that on my previous ProLite trailer.

While I was chasing the cause of, in my opinion, excessive bounce and rearrangement of trailer content among the things I checked was tongue weight. It was more than the recommenced 15% of trailer weight so I started to look for ways to reduce tongue weight.

The most obvious was to relocate the battery from tongue to a more rearward location. I had used AGM batteries in the ProLite so was planning to do the same but as I researched more I found that an AGM, even though sealed, can still give off gasses making it unsuitable for location in the living area, which is the only rearward option.

More research and the result was a 100 AH Lithium battery. I was almost tempted to buy direct from China but ultimately purchased a Battle Born Battery from their Canadian distributor, Solacity, Inc.

I had retained my Inverter from previous trailer and had plans from the beginning to incorporate it. The Ascape had roof AC installed and initially I thought to keep it. To run it with Inverter I would need a startup gadget as the inverter had power to run it but not start, which is quite common. I thought about running fan only, as that’s really all I wanted but even that was too noisy.

Decided to swap the AC for a 12 volt fan. Made much more sense and the install went well. See here for details of the AC to Fan conversion.

With roof AC out of the picture the Inverter would be able to power Microwave and whatever else minor Hydro requirements we might have, such as a regular toaster.

While testing Inverter power I found that Microwave at 80% would be ok but for regular use I would need more battery capacity, hence the addition of the second battery. 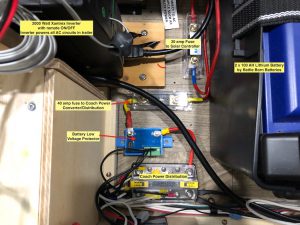 I install the Inverter with a remote on/off switch, easily accessible, and an automatic transfer switch so that with inverter on and no shore power the inverter would power the whole ‘house’, 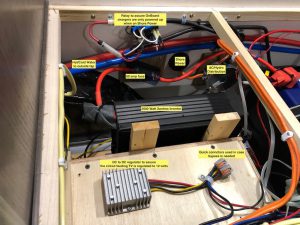 Whole ‘house’ on inverter had to be whole house except for the coach converter/charger and the additional battery charger I installed for the Lithium batteries. That was accomplished via relays so that the chargers would only get power when on real shore power and not when on inverter power.

Since the 12 volt DC power could easily range from less than 12 up to 14.6 I decided to install a DC to DC regulator on the circuit that feeds the TV/DVD. 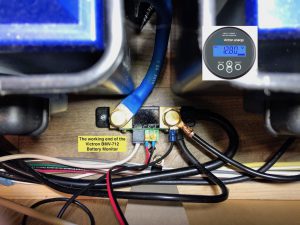 The ‘712 came with the shunt and the electronics that are connected between Negative battery post and the actual DC load. To get accurate monitoring everything needs to be connected via the load side of the shunt.

After lots of procrastinating, I finally installed a master shut-off for the Battery Bank.
Battle Born Batteries recommended disconnecting the batteries when trailer is not in use, rather than leaving it plugged in to shore power to keep batteries up.

To make that easier I’ve installed a Master Shut-Off. 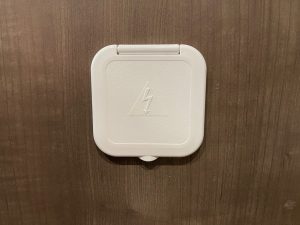 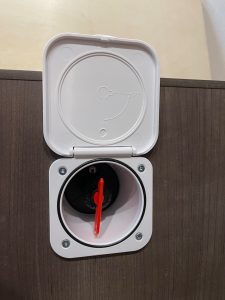 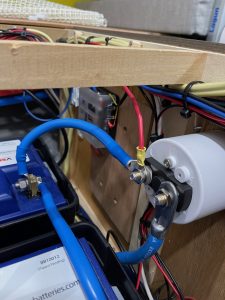 In case you’re wondering what the extra red lead is, it’s a bypass of the Negative so that I can still run my Bluetooth battery monitor. (The color has been marked black after the pic was taken). 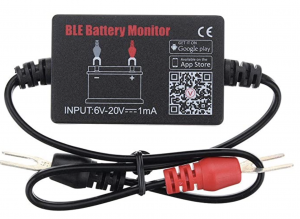